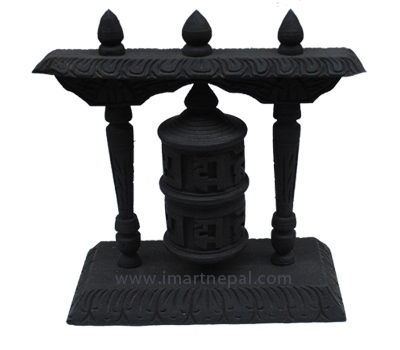 This is an exclusively Tibetan Buddhist praying instrument which always bears the mystical word 'OM MANI PADME HUM' [Om the Jewel in the Lotus Hum] numbering six syllables in the mantra of Avalokitesvara. The syllables are carved outside the wheel as well as kept inside the wheel printed in the paper in numerous numbers. It is generally made of a cylindrical body of repoussé metal/wood, penetrated along its axis by a wooden or metal handle. The cylinder can turn around the handle, with a slight rotation of the wrist, thanks to a cord or ballasted chain, which keeps it in movement. Inside this cylinder, written on paper or skin, are esoteric texts, usually invocations (dharani or mantra), the most common being that of Avalokitesvara. These prayer wheels may be small and carried by pilgrims, or larger and fixed to the gates of monasteries or around stupas and chortens. Each turn of the cylinder generates as much merit as the reading of the sutra or the formula enclosed therein. All these objects are also called chhos-hkor in Tibetan, 'Wheel of the Law'. Some are very large and, enclosed in small structures, turn under the action of a 'mill' driven by water. It is made of wood.