Sarangi, a traditional Nepali musical instrument is the best friend of Ghandarvas – a community of Kaski district. Their songs’ power comes from their soul instruments—the sarangi and the arbaja—and in that haunting voice they are known for, they bring forth the bhakas, the stories, the karkhas, the seasonal songs, and the festive songs.

Sarangi a four-stringed instrument played upright, with a bow is handcrafted out of a single piece of wood, hollowed at the base then covered with leather. It is played by rubbing on the wire and can be said to be a miniature version of violin owing to its technique and structure. The people of Gandharva community play this instrument along with the song they compose about real life incidents and events which they can relate with. The instrument’s sound resembles the human voice laced with rich oriental undertones.

In times, prior to postal era, telephones and introduction of modern technologies the Ghandarvas traveled singing about legendary heroes, ongoing battles and incidents of what they saw on their journeys.

Today, because of digital connectivity, the time-honored storytellers Gandharvas have been losing their authenticity rapidly. Though the sarangi holds a significant role in the folk genre of Nepalese music due to globalization and commercialization of music and entertainment, the tradition is slowly dying and the instrument itself faces extinction. Despite, Gandharvas losing their identity, there are still few places in Nepal where the authentic Gandharva culture can be a witness at its best.

In previous years, Late Jhalak Man Ghandarva, Khim Bahadur Ghandarva, and Tirtha Bahadur Ghandarva and many others have won the hearts of several traditional music lovers to become the national figures. In between performance by Chec Bahadur Gandharva, Buddhiman Gandharva, Gopi Lal Gandharva, Akal Gandharva, and Gyanendra Gandharva is noticeable. Furthermore, the Batulechaur in Pokhara is one of the major places where few old hands are schooling the young ones to preserve the rich Ghandarva culture of Sarangi Music.

Late Jhalak Man Gandarbha is one of the most significant Nepali folk singers. He is popular for Gandarbha Sangeet, a popular type of folk song sung only by the Gandarbha ethnic group of Nepal. He is the first singer to record a song and is respected for bringing the voice of indigenous and ordinary people into the mass media. Aamale Sodhlin Ni … (Mother may ask …) is by far his most popular song, which intones the death of a Nepali soldier on a foreign battleground. To honor the greatest Nepalese singer the government of Nepal has built few statues for Gandarbha.

Khim Bahadur Gandarbha is an old, well-traveled talented musician as well as a revered teacher living in the place called Batulechaur. He started teaching more than a decade ago with the hope to pass on the knowledge and tradition gathered from a lifetime of accomplishment. He has taught more than 250 students about the traditional way to play Sarangi and his students are from Batulechaur to as far as Mexico and Finland, America and Switzerland.

He has been honored with many awards and recognition and his tiny home is adorned with pictures and medals describing the story of his success and achievements. He had also received a medal from Chairman Mao, the late leader of China and from King Mahendra along with a lifetime recognition award by Pokhara’s Rotary Club for his dedication to teaching at Pokhara’s Institute for the arts, the Sangee.

Kiran Nepali, a renowned Sarangi player from Nepal, is a member of the folk band Kutumba. He is a third generation Sarangi player in his family and explains that he is greatly influenced by his grandfather, father, and uncles, who were all Sarangi players of their times. Kiran spent 4 weeks studying the Sarangi in the Batulechaur area, a well-known Gandharva settlement close to Pokhara. Kiran also plays the guitar and teaches Sarangi at the Mitrata Music Program, created by the PFC Foundation in an orphanage located in Kathmandu. He is running a project called “Project Sarangi” to promote the folk music of Nepal.

He says, “The sarangi is not a very loud instrument. Musicians try to work with microphones on stage, but there is a lot of feedback to deal with”

In this journey Kiran, the sarangi player has in many ways, been a catalyst for the evolution of the ethnic instrument. And it’s definitely more than just wanting to play a unique instrument. It’s about developing what you love.

Music has always been an important part of our culture. Ram Prasad Kadel and the Music Museum of Nepal have been working as fast as they can for many years to record as many of the old masters as they can for their archives. As Ram explains it, preserving some of the great old traditions, so he is working as hard as he can to save these jewels for future generations. But with little money and resources, his museum is still quite humble and small, though beautiful and very well presented.

More to this, the Mountain Music Project made a documentary film a few years ago on how similar Appalachian old-time music is to the Gandarbha music here in the Nepali Himalaya, they have discovered that this other cousin of traditional music has been kept alive in the US as well. Our pieces of music sound similar; scales, and themes are similar. On the Mountain Music Project CD, some of the great musicians like Tim O’Brien, Tony Triscka, Riley Baugus, Curtis Burch, and many other extremely knowledgeable pickers were blown away by how similar out music really sounds.

Lastly, the musical messengers, the community of occupational caste musicians Gandharva, fulfilled the exclusive role of relaying information from one place to another with a soft musical tone played with the traditional Nepali musical instrument Sarangi. Their music needs to reach people who will value an art form that is different than what’s mainstream because there is so much artistry, so much poetry, and so much soul in their art.

Produce your own tunes and immerse yourself in the melodious sound of Sarangi.

Nepali Sarangi is made up of a single piece of wood, having a neck and hollowed-out double-chambered body, they are often made from wood of trees that are easily available, most often that of khiro, saal, lakuri, or Aap. The upper chamber is left open, and the lower opening, upon which the bridge rests, is generally covered up with dried skin of sheep or goat. The strings are tied upon and tuned with the tuning pegs.

The sarangi was named Red Jatayu because the head of jatayu was carved on the top of sarangi and about 1/3 part of it is painted red. In the Hindu epic Ramayana, Jatayu is a divine bird. He tried to rescue Sita from Ravana. It is believed that Jatayu fell on the rocks in Chadayamngalam, Kerala after his wings were clipped off by Ravana. This is the place which is mostly credited to the falling place of Jatayu since rocks there hold striking carvings of Jatayu's beak mark during his last breath and footprints of Lord Ram.

This sarangi was about 1.6 kg and 63.5 × 20.32 cm in Dimension. Red color red has painted which seems to be more attractive and beautiful. This sarangi was made up of khiro wood, leather and string used to complete it.

Sarangi is a traditional folk musical instrument especially played by Gandharva. It is a popular musical instrument made of a piece of wood, the bottom of which is made a hollow and four pieces of strings are fastened tightly with four wooden nails fixed on the top of it. It is played by rubbing on a group of strings especially left and right repeatedly with a small stick, which is fastened with some strings. Sarangi resembles the violin in western culture. Sarangi in Nepal is played from so many years. It has its own famous rhythms and tones. Sarangi in Nepal has been used as an instrument used to convey the message and news across the country. The Gandharvas used to travel across the nation and go home to home singing the song of current affairs and earn some money. That was kind of messenger tradition.

There are different methods of producing notes on the Sarangi. Most players play the Sarangi by pressing the strings slightly with their fingers of the left hand and bowing the strings with right hand. However, Bharat Nepali and his students rub their left hand fingernails to rub against the strings to create sound. The range of the Sarangi covers almost two octaves, and it is tuned in 5ths.

Sarangi is a Nepali folk musical instrument. The Sarangi of Nepal has only 4 strings. Traditionally it was played by only the Gaine or Gandarva caste. This is a usual kind of sarangi used by them. Polished wood makes the sarangi much more attractive. People are keen to use sarangi in recent days. We hope that sarangi will find its place on worldwide music Industry. -- 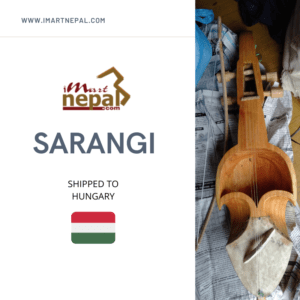 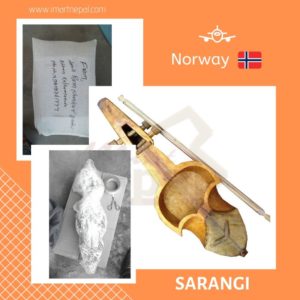 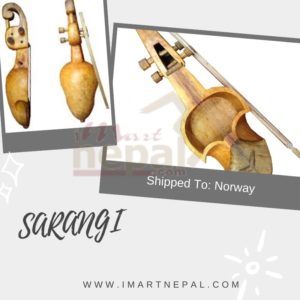 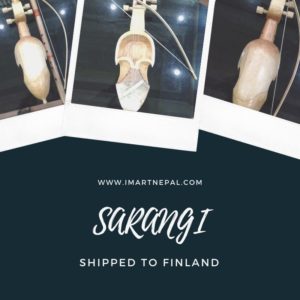 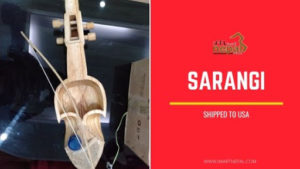