The word ‘handicraft’ generally refers to the art of making craft. Nepal is a multi-cultural country with vast diversity in itself. Nepal is a place where we can find different culture and religion within a certain distance over a place according to the caste system. 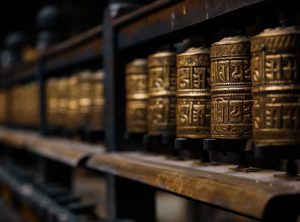 The evolution of Nepalese handmade craft cannot be explained in precision. But can be traced back to the Stone Age. The history of artistic handicrafts only began during the 5th century (A.D), when different religions began to form their bases among the people of Nepal. The cultural-religious category (community) in Nepal is divided on the basis of work i.e. Brahmins (Priest), Kshatriyas(warriors and rulers), Vaisyas(skilled traders, merchants, and minor officials), Sudras(unskilled workers), and Pariah(“Harijans” which are also known as “children of God” and outcastes, “untouchables”). So, we can see lots of verities on handicrafts according to the community. Thus, we see a lot of religious influence on Nepalese handicrafts which are Introduced by the Nordic Aryans, mixed with different groups of Mongolians, protected by Buddhist and Hindus concepts adapted to the taste of the market. 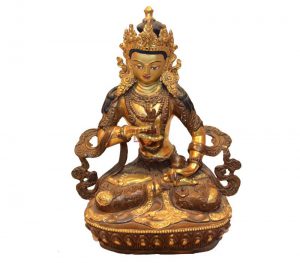 The above figure represents the statue of Vajrasattva which is one of the antique crafts of Nepal. Vajrasattva is traditionally viewed as the second patriarch, the first being Vairocana Buddha himself. Vajrasattva is used in the Ngondro, or preliminary practices, in order to purify the mind’s defilements, prior to undertaking more advanced tantric techniques.

Handicrafts reflect the pristine culture of the country. In the traditional period, the crafts are made on the stone and wood of the temple with religious values but now a day the crafts are not only made for temples. It has increased its value in decoration also, as for interior decoration as well as a gifting purpose. It is believed that the traditional statue spreads positive vibes to the surroundings. Which has also increases the import-export of handmade figurines internationally and increased even the economic values. 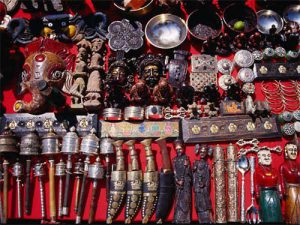 Nepali Handicrafts – All the tools in this picture have different traditional and religious values from different communities.

Last decade, handmade crafts were the major source of income for Nepal. A record shows that in the fiscal year 2013 2.07 billion Pashminas were exported; 4 billion garments and 6.075 billion worth of carpet were exported. Nepalese handicrafts are exported to U.S.A, Canada, Germany, Italy, France, U.K, Denmark, and many other countries. This clearly explains that the demand for Nepalese handicrafts is extremely high. Not even only statues, the production of pashmina, woolen, felt, silk, cotton, Dhaka Products, and hemp products have been facilitating many indigenous societies to make direct income. In the year 2013, handicraft covered 46% of total export and Rs 4.36 billion total handicrafts were exported. 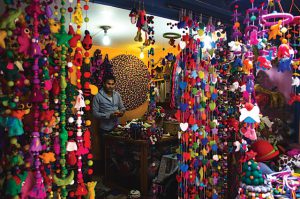 With the further development in technology, the procedure of trading the crafts has also changed for example the handmade craft products are listed on the online store like us. From these portals, people can now easily get all the information about these products in detail and even can purchase with the facility of home delivery.