Most Interesting Thing One Could See in Nepal 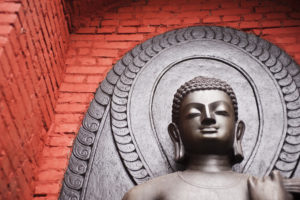 If you are traveling to Nepal, there are so many things that you should know so that your subconscious will be prepared to deal with every improbable encounter which may befall you. Social norms set by the oriental religions like Hinduism and Buddhism, you can feel the aura of mysticism around the temples like Pashupatinath and Swayambhunath.

Don’t freak out seeing the scooters and bikes running like madmen on the dusty street, that is commonplace. And, most of all, if you happen to bump into an elderly woman joining two palms and saying “namaste” (which happens a lot), be cordial enough to reply here with the same gesture; it’s the way Nepalese greet the fellow human. You can also see different statues, wood carvings and temples and also sarangi playing in the street.

Whenever I talk with the foreigners traveling in Nepal, there are few things, which they find kinda unusual, which aren’t necessarily bad. Being one of the developing nations in the world and recently crawling towards the path of democracy, there are so many aspects of life that are still backward compared to life in the west. Here I have presented a few unusual things you might come with vis-a-vis, during the travel.

Also known as “Kumari”, it’s the century-long Hindu and Nepalese Buddhist tradition of worshipping the virgin which is considered to be the manifestation of cosmic power. Widely celebrated in Kathmandu valley, Kumari resides in an abode known as “Kumari Ghar”. She will be displayed on different occasions, commonly called “Jatra” in the valley. Surely, this tradition may appear as a bit of surprise for you, it’s a sacred ritual for the castes like Shakya and Bajracharya.

The sacredness of Cow:

The cow is taken as a sacred animal in Hinduism as it represents the goddess Laxmi (Hindu Goddess). During Tihar, also known as Deepawali, one of the two largest Hindu festivals in Nepal, cows are worshipped. But most of the urban streets are often encroached by stray cows which adds further problems in traffic management. So, don’t go “ holy cow!!”, if you happen to notice a lazy cow strolling in the middle of the road, it is common.

Riding a bicycle on the roads of Kathmandu is way too scary that there’s an unspoken code “ ride on your own risk”. And talk about the endless motorcycles and scooters. These two-wheelers outnumber the public vehicles and cars which create such a mess during peak hours. Though the traffic police ( yeah, we have traffic cops, strange, right?) brings out so many plans to curb the problems, old habits die really hard.

Surprised? Well, most people find it perfectly plausible in Nepal. Any girl or a woman during her period is barred from all religious activities for four days. Also, she is not allowed to cook and serve the family. Even though the tradition is slowly fading, still it’s in practice in most households.

Of porters and Rickshaws:

Kathmandu, unlike most of the capitals, isn’t well managed; one of those Nepali ways of living is depicted by the presence of porters around the market carrying wardrobe, refrigerator or you name it. The tradition of the porter system dates way back and can be seen in the photographs taken by Tony Hegan during the 50s. In addition, you can travel around Thamel, downtown Kathmandu, in a rickshaw, which is pretty fun, I guess.

Cops are often seemed to patrol in the alleys of Kathmandu with bamboo sticks unlike the cops in the US or in most of the countries. In a way, it’s pretty secure to wander freely around the valley and cops can be really helpful in many ways.

Nepal has a triangular national flag:

Nepal is the only country in the world having a non-quadrilateral flag. The triangular flag of Nepal depicts the mountain range and the pagoda style in the temples. The blue boundary shows peace whereas the crimson red glorifies the Gorkhali history. The celestial bodies Sun and Moon symbolizes the permanence of Nepal.

Though bungee jump is practiced in most countries, the thrill of jumping towards the mind-blowing gorge of Nepal is an experience not easily subdued. If you are traveling Nepal for adventure, bungee should be your first priority as they feel will remain fresh in the pile of your memories. The famous bungee jump is carried out in Nepal by “The Last Resort” in Bhote Koshi gorge. Also, you can experience bungee in Pokhara, the tourists’ paradise.

I cannot label paragliding as one of the unusual things in Nepal but by far it’s one of the bests in the world. Who wouldn’t love to savor the gorgeous aerial view of Mt. Fishtail and the bird-eye view of magnanimous Fewa lake and Pokhara valley? Operated by trained pilots, domestic and international, paragliding in Nepal offers such a deal, not even Cersei Lannister would dare to refuse.

It amazes, even me, a typical Nepali guy when I observe so many cultural practices within a small area of 147, 181 sq. km (well, it’s the area of Nepal). And probably it’s a major fascination, the tourist gets on traveling Nepal. The presence of Buddhist shrines like Boudhanath and Swayambhunath along with the Hindu temples in Kathmandu valley exemplifies the cultural diversity. The celebration of different festivals like Dashain, Tihar, Chauth, Loshar, Udhauli, Deuda, Maghi, and so many local Jatras depicts the century long diversity in Nepal.

Hope you all enjoy it.